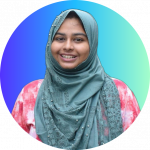 Dr. Nawab Mehetab Nasreen is an Insurance Medical Officer at Employee’s State Insurance Corporation, Government of India. Currently she is serving as a V-Force Coordinator at UN Volunteers India. She has started her career in 2018 as a Junior Resident doctor at KIMS – Saveera Hospital – Anantapur. Later on, she became a medical officer at Chandranna Sanchara Chikitsa. Since 2019 she is serving as an Insurance medical officer at Employees’ State Insurance Corporation, Government of India.

She has contributed as a V-Force Leader at United Nations Volunteers India in 2019. Currently, she is contributing as a V-Force Coordinator and working with a team of 5 members.